The word “Etosha” means “great white place” and, although it obviously does not exhaust all that the Park shows us, even at first glance, it is actually a good summary of what our eyes see when we are at the heart of which is Namibia’s most famous National Park. 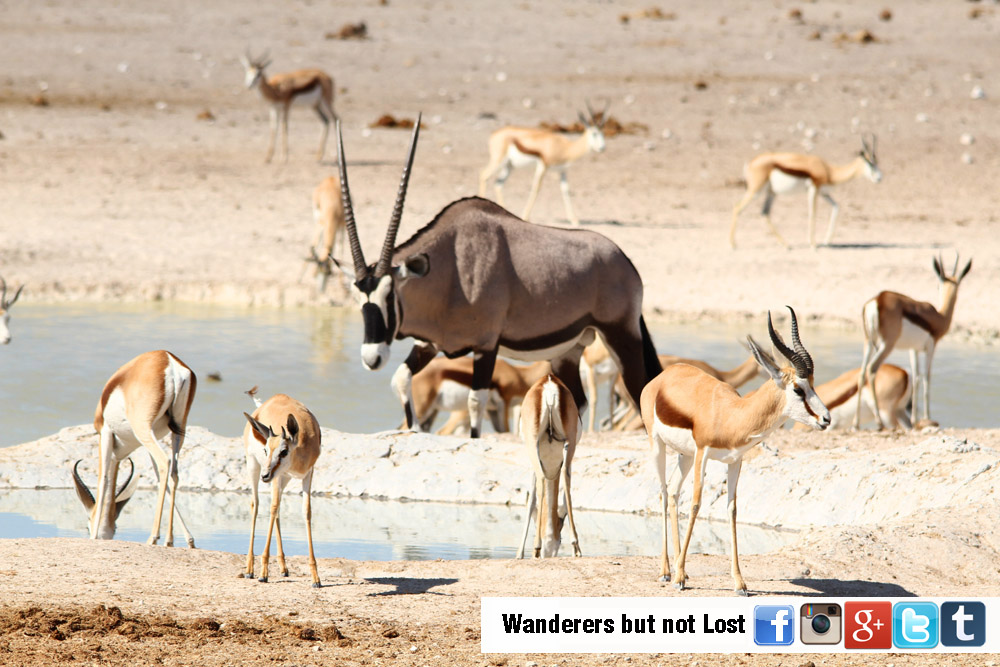 Interestingly, the “great white place” was in the past bigger than it is now, at least when it comes to its official dimensions. When, in 1907, the governor of the then German colony of South West Africa decided to create a National Park in order to preserve wildlife, the park was not fenced (which allowed the migrations of animals, such as the Serengeti Park) and had an area of approximately eighty thousand square kilometers (i.e., slightly smaller than the area of Portugal), but throughout the twentieth century suffered reductions until 1970 reaching its current area of about twenty-three thousand square kilometers. 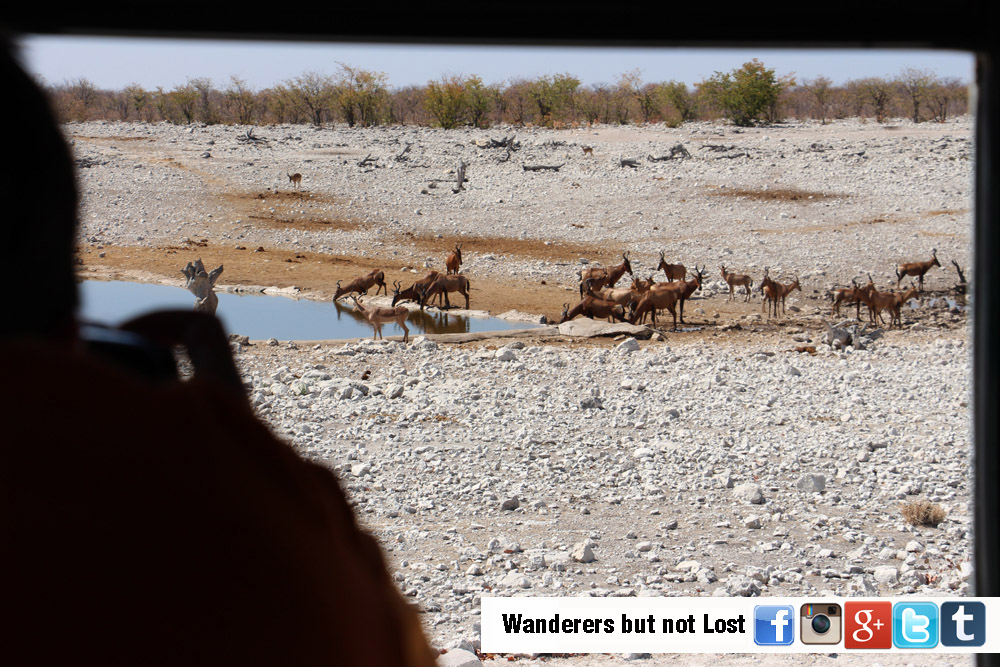 The terrain depression that occupies the center of the Park is the Etosha Pan, a desert and salt flat area, about five thousand square kilometers (with a maximum length of 110 km and a maximum width of 60 km), totally empty of life except the few animals who venture into the vastness of the plains (or rather plateau, since we are more than 1000 meters above sea level), or the few days a year when, due to heavy rains, the waters of Ekuma and Oshigambo rivers transform at least part of Pan into a lagoon where flamingos and pelicans delight. 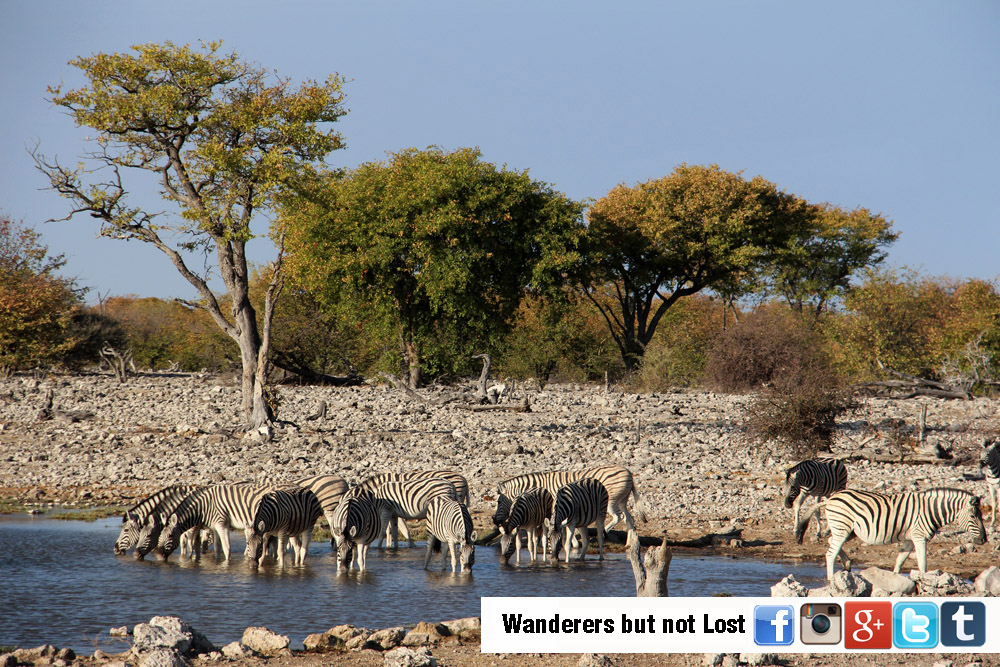 In fact, the whole park is very dry, with few permanent natural springs fed by underground water reserves. These are now some added water sources, but artificial ones, where water is pumped from underground. Natural or artificial, all of them are a salvation of wildlife and enabling its fixation in such arid zone. 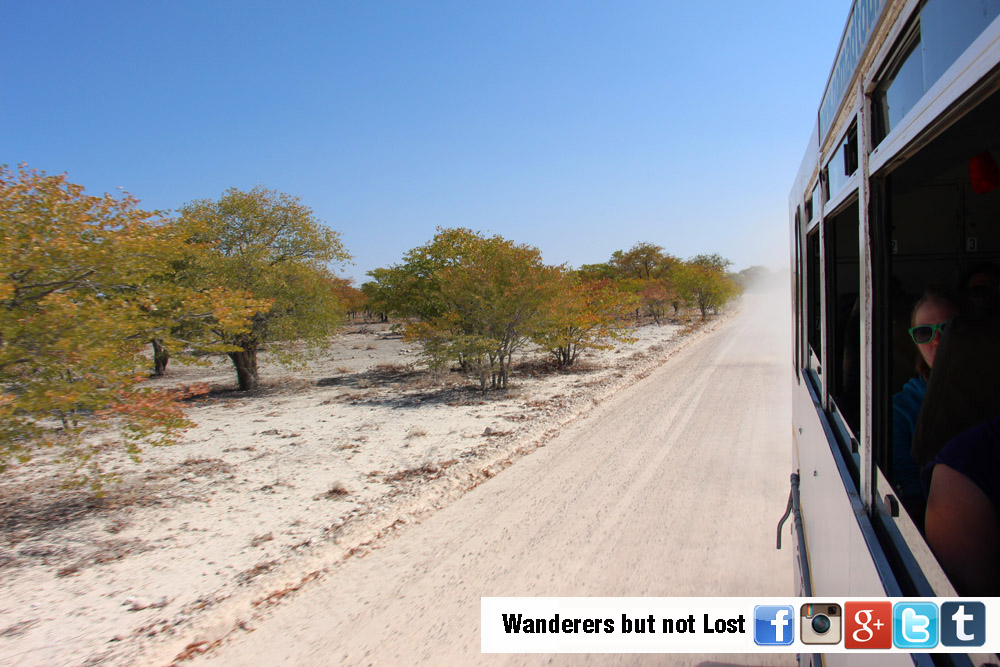 Interestingly, geography and morphology of the park is the reason for its world fame and its unique character, especially when it comes to observing wildlife. This is because the aridity of the land and the scarcity of water holes drive animals of different species to come together in the same restricted area, and accessible to the cameras of tourists. Just wait, and sooner or later, the procession of species will pass before your eyes. 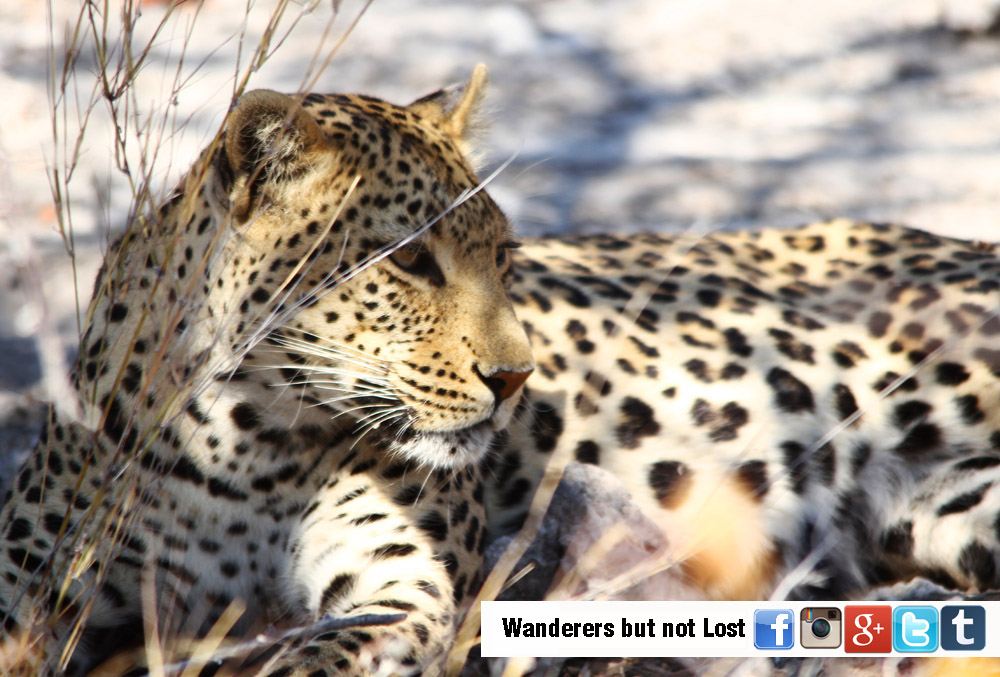 Another very positive aspect of the park is the fact that three large and well-equipped camps spread along the contact with the southern border of the Pan. The entrance to the Park, southwest of the Pan, is near the Okakuejo camp, headquarters of the Park. Heading north, there’s the Halali camp (opened in 1967 and the most recent), in whose surroundings are a ‘Lookout ” of the Pan and the only hills of the eastern part of the park, and further northeast the Namutoni camp, situated at the place where the two first European explorers camped when they discovered the Etosha Pan in 1851.

In all camps, the great attraction is the water hole, strategically located along the fence (outside!) of the camps. You can spend as much time there as you like, taking advantage of the real catwalk of wildlife that will certainly follow. In our two nights in the park, while in Okakuejo, the stars were two male lions that were resting next to a dead baby elephant, while in Halali, we witnessed a veritable procession of different species to quench their thirst in the evening, notably a herd of elephants, led by an impressive and noisy male, and a couple of rhinos engaging in foreplay. 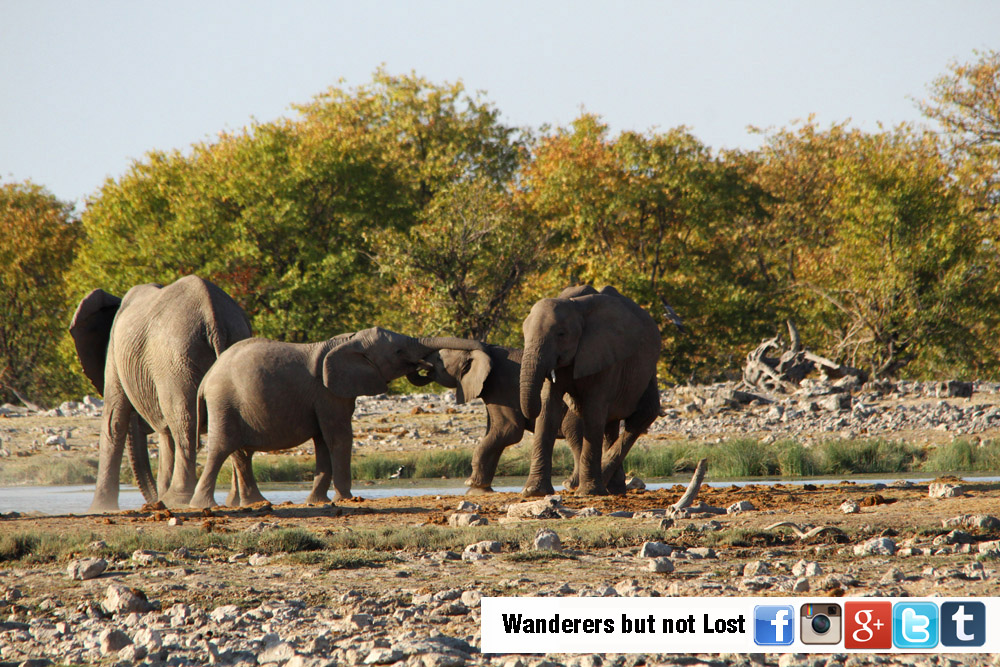 Far from water holes (but not too much!), it is also possible to see wildlife, very diverse when it comes to birds, and, if you are lucky as we were, you can even get to see a beautiful leopard, furtive and camouflaged, sheltered in the shade of a tree. 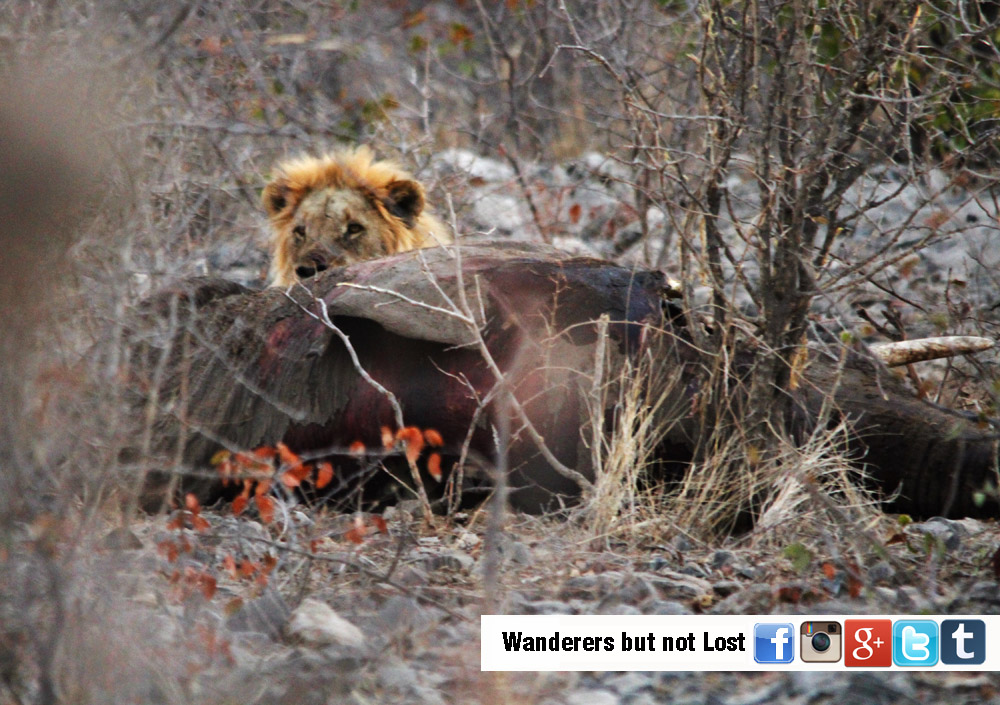 You can also explore the park with your own car, but it must be noted that all gates (including camps) open at sunrise and close at sunset (in the time of year we visited, end of July, six in the morning to six in the evening). Outside these hours, you can only go through the park in a Park vehicle, for example at night game drives.

It is forbidden to drive off road, as well as stepping out of the car, except in designated places. Mobile phones are only allowed at the gates and in the camps, and out of these only in case of an emergency. Feeding the animals is prohibited.

Finally, we must emphasize that in spite of everything mentioned, the Etosha National Park is not a zoo (where animals cannot avoid being seen!), and the quality and quantity of animals that are observed depends on various factors such as the time you have available within the Park, as well as the explored area, but also one that has nothing to do with the quality of the park or the professionalism of the tour operator: luck! In order to avoid unnecessary frustration when visiting such a special place as this, we encourage the visitor to enjoy the moment and everything that nature is willing to display. Everything should be welcome, because everything is a gift of nature. 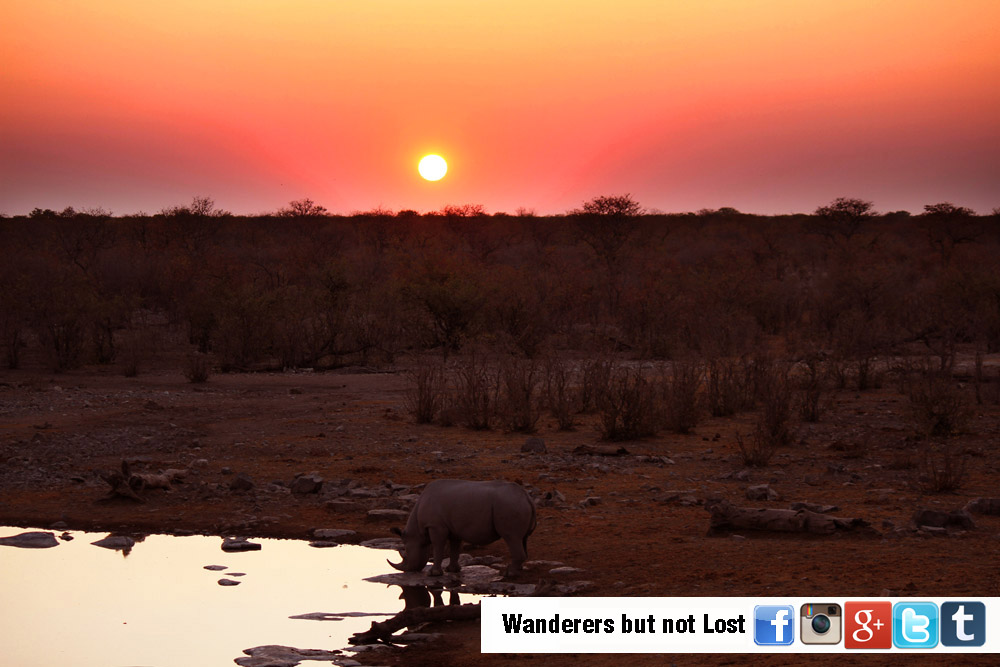