A week after the opening of the Paiva River boardwalk, “Travellers But Not Lost” prepared a backpack with picnic, joined a group of friends and walked through the famous valley of the river Paiva, in the north of Portugal. Once a place only accessible to the more adventurous ones, like those who defied the strong currents and fast rapids in rafting boats or kayaks, now the valley is accessible to all. 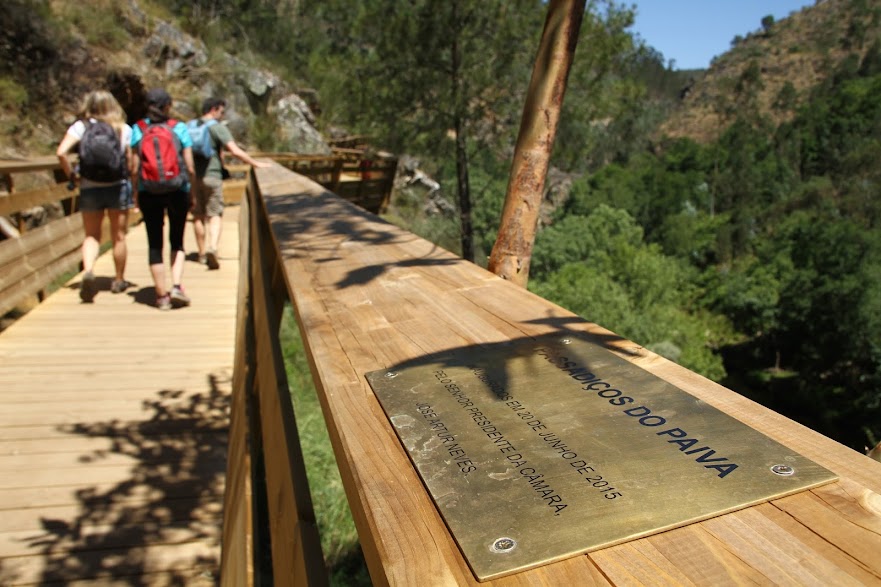 Paiva river is one of the purest in the world and was considered, in the 90’s, the least polluted river in Europe. While much has happened since then, Paiva river continues to have a very clean stream, with clear water, and is considered by many nature lovers, the most beautiful river in Portugal. With so many titles and compliments, we could not afford to miss the opportunity to explore the valley of Paiva River. 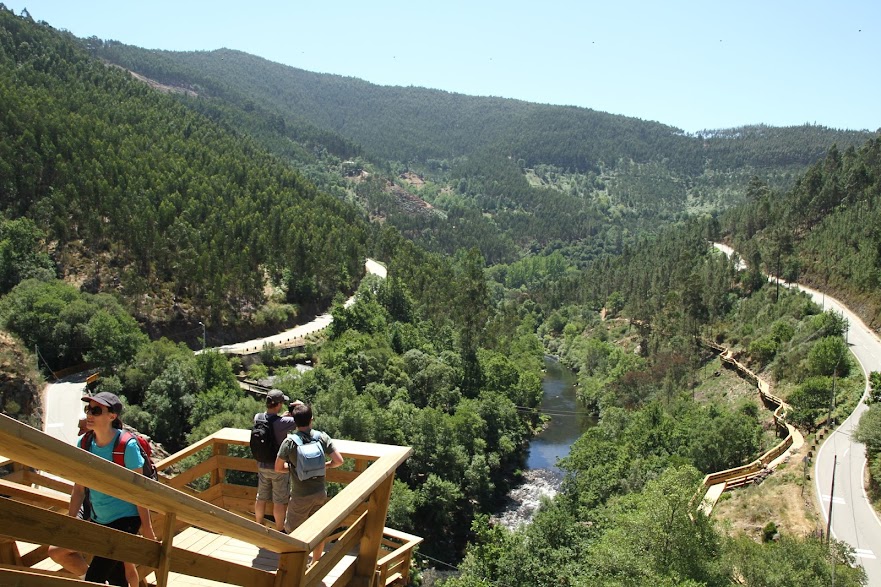 Arouca municipality, partly financed by European funds, built a wooden pathway of about 8 km (12 miles), nearly all of it based in suspended structures built in the valley. The route links Espiunca to Areinho in Canelas (right next to Alvarenga), always following the rocky and steep slopes along the left bank of the river Paiva. The route is now part of the Nature Park of Arouca. 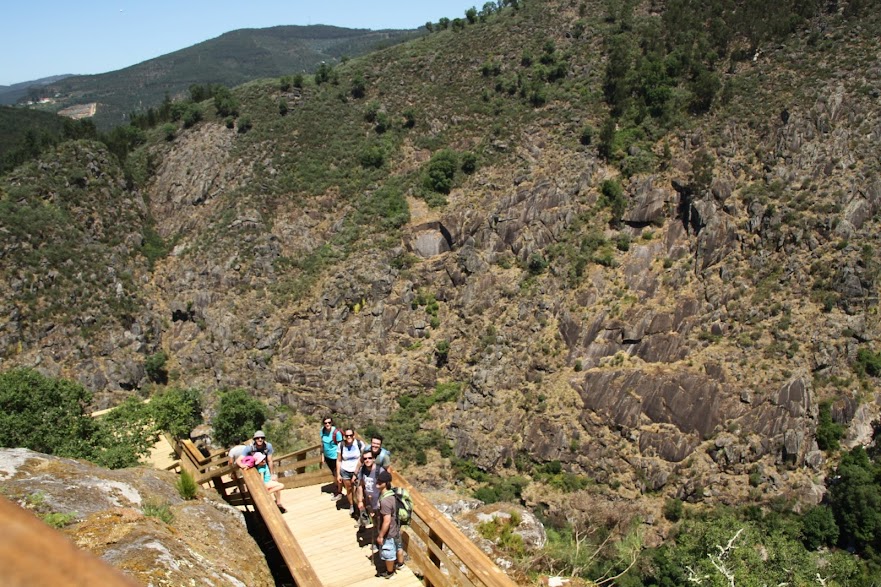 The route can be done both ways, but if done by your own, you will have to return back, which makes a total of 16 km (24 miles), as it is a linear route. However, as we had several cars, we placed cars in both endpoints and we did the path just one way, allowing us to have enough time for enjoying the scenery, stopping for a picnic, taking pictures, and even having a dip in the magnificent Paiva River beaches found along the route. 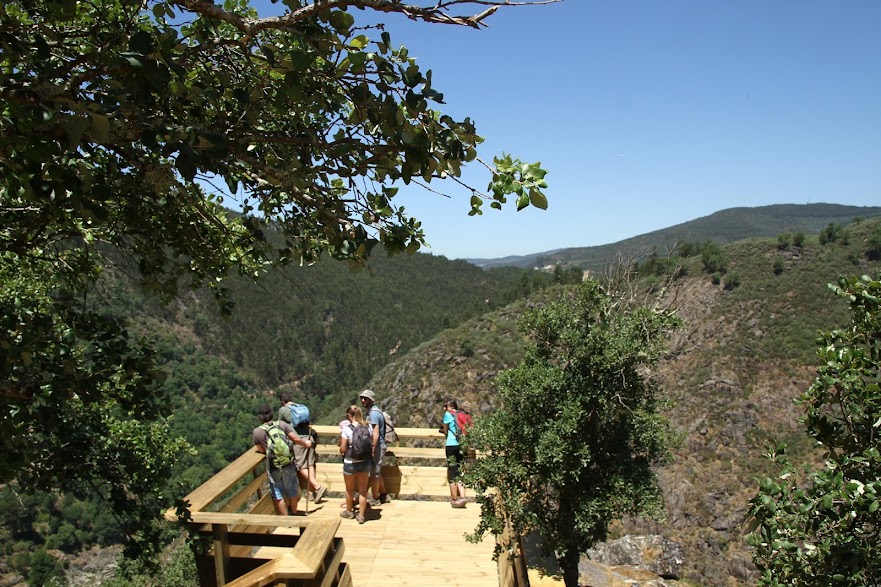 – Go with friends and take two cars. Leave one in Espiunca and the other in Areinho (near Alvarenga), as this will allow you to do just the route of 8 km (12 miles) and you will not need to turn back.

– There is a car park on the shore of Areinho river beach in Canelas (Alvarenga), where there is a bar.

– There are also several parking spots, including an impromptu park in a large dirt field at Espiunca. At about 50 yards from the park, in the village, there is a small cafe.

– Follow the route towards Areinho – Espiunca. The initial climb is quite hard, but the total distance is about 400 meters. After that, the route profile is always downward, allowing you to enjoy the landscape.

– Take plenty of water with you. We just found one running water point near Espiunca.

– The route has many shades and many places where you can have a picnic. We recommend you to do it near the Paiva River beach of Vau, a beautiful place, full of puddles of water on the rocks and with lot of trees providing shade.

– Do you feel unsafe and uncomfortable in this kind of pathways? Do not give up. Along the way there are emergency telephones similar to those that exist on motorways, and several emergency exits, some of which can be reached by car.

– Take comfortable shoes and enjoy the scenery of Paiva River. 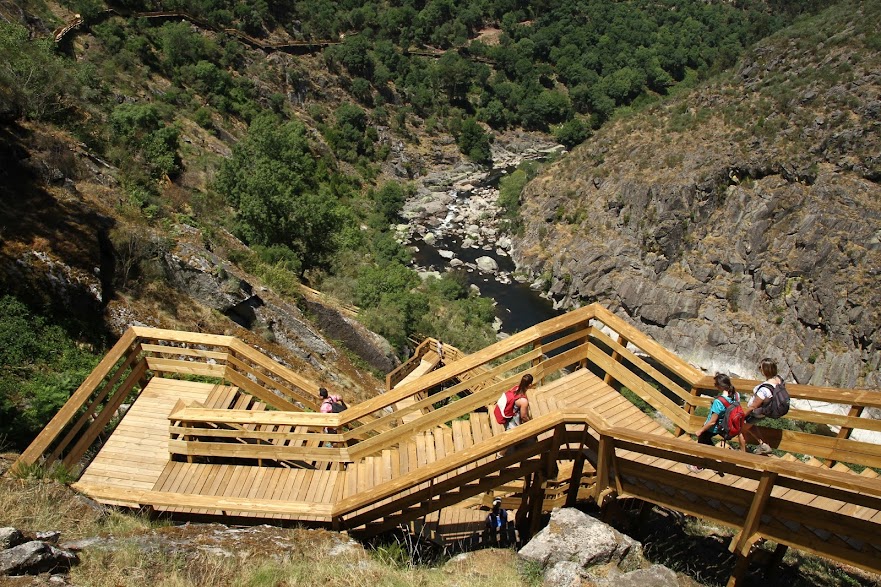 We did it in July, and we started out quite late, around noon, and the temperature was about 35°C (95°F)! We do not recommend that… Start as early as you can. It was very hot, and there was no wind in the valley. We were eight, one of which was an eight-year old (who behaved quite well and did not have any trouble along the route). The beach of Areinho invited us for a swim, but we all knew that if we gave in the temptation, we would let time pass and maybe softening up for what lied beyond. 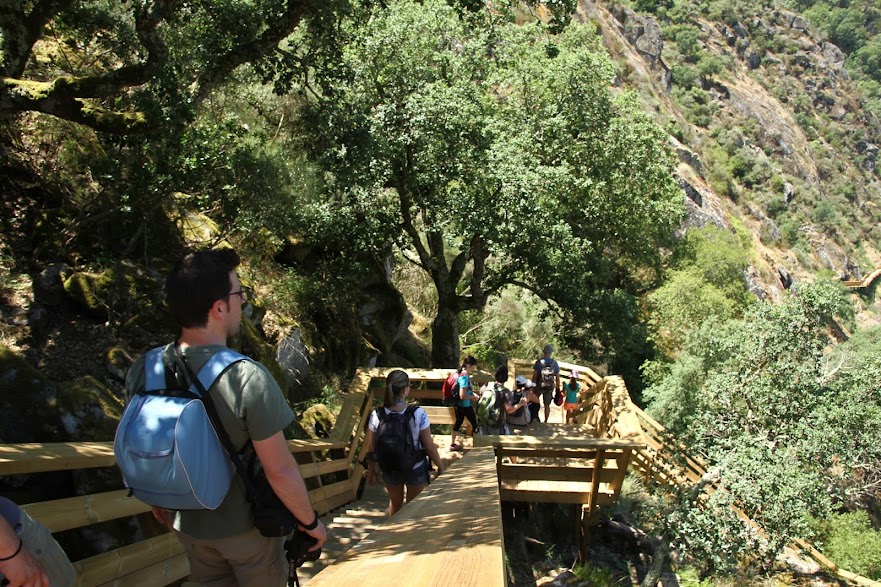 Starting at Areinho is the best option. The initial climb is reminiscent of the Great Wall of China (with due differences in proportions and being a wooden version) as the walkway meanders the quartzite ridges where the Paiva River carved a valley in deep throat. The throat of Paiva is one of sites classified in the Nature Park and there is no doubt that its beauty is phenomenal. The views are overwhelming, and worth stopping quite frequently, in order to regulate your breath while contemplating the landscape.

The initial climb takes less than 30 minutes and, as a reward to the effort spent, there are two viewpoints that take our breath away (quite literally!). The vertical difference is around 200 yards but, when it is too hot, the climb can be exhausting. The landscape is wonderful and is right beside with the best routes we’ve done in the Pyrenees and the Picos de Europa. 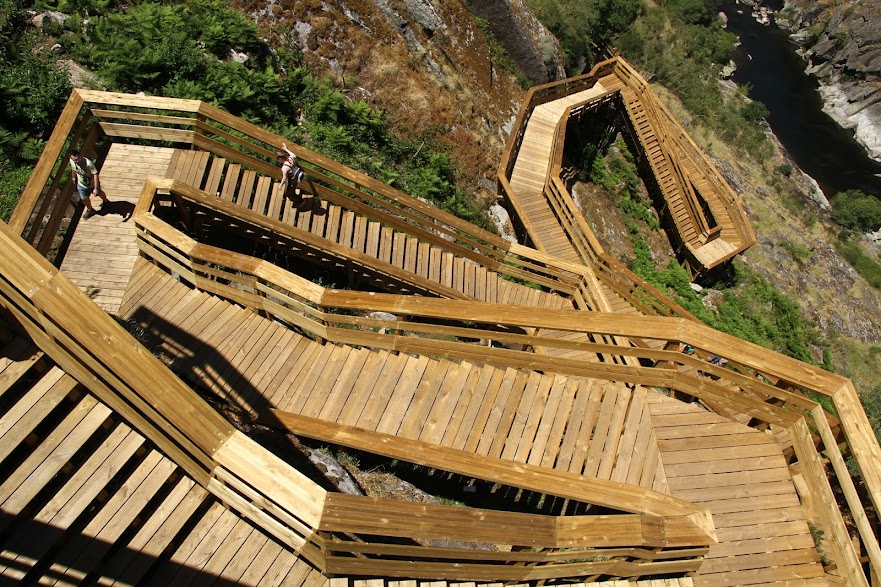 After the viewpoints, it is almost always downhill. This was the great advantage of starting in Alvarenga. Throughout our journey we had enough shade, which made the journey very pleasant and minimized the effect of the heat.

At some point we decided to stop for picnic. As we started quite late, we ate before arriving at Vau, but as soon as we got there we realized we had made a bad choice. Vau has a beautiful beach, with plenty of room to avoid crowds and also has plenty of shade. It is a beautiful place to have lunch and take a dip.

Upon arriving at Vau we had a pleasant surprise, a wire bridge that connects the two banks of the Paiva River in this area. Although the route does not require crossing the bridge, doing it is almost mandatory. At the middle of the bridge you can see the river from a completely different perspective. In addition, you can take beautiful photos, and all visitors seem to be delighted. The whole place is idyllic. 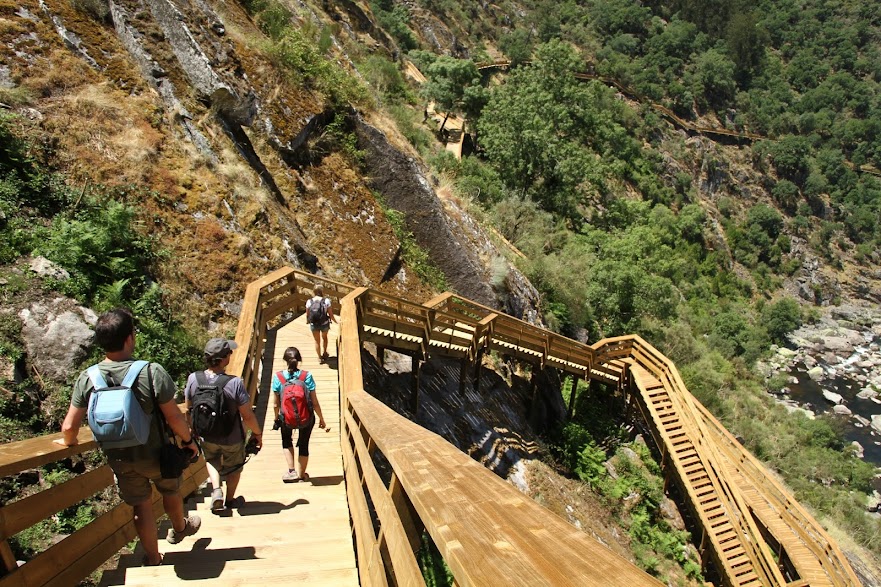 We returned to the route. At one point we passed an area where Paiva River meanders around a hard rock outcrop. It’s great; at this site one can contemplate the river and the way the wooden walkway follows the river.

Further on the route, one continues towards Espiunca, where there is a delightful large river beach. The trail ends near the bridge over the Paiva River, but in summer, when the river flow is reduced, it is possible to cross under the bridge to get to the river beach. We chose only to bathe here, but we regret it afterwards. There are far more beautiful places, more isolated, and best for having a dip along the way. Just pick one place, or more, and enjoy.

Later in the day, we were all radiant and happy. But, like most Portuguese, we decided to end our adventure delighting ourselves with the local cuisine, so we did not resist a good Alvarenga steak. 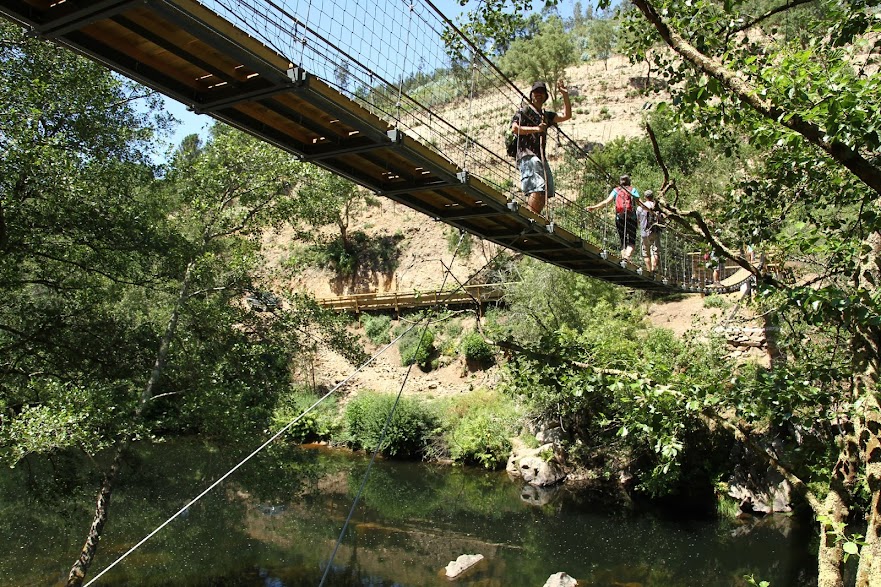 Bonus tip: As we started the route quite late, we did not have time to do this, but we recommend a visit to the Geological Interpretative Centre of Canelas (Valerio quarry), on the way to Espiunca, one of the few places in the world where there were found mammoth fossils of trilobites dated around 465 million years. 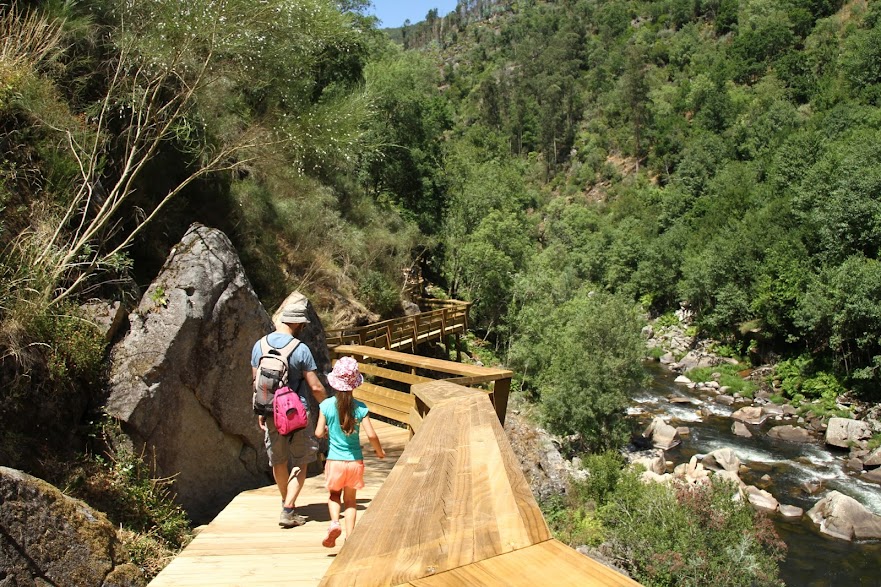 Getting there from the North: Exit Oporto towards Lisbon, and follow the A32 towards Vale de Cambra, where you should exit. There, follow N224 towards Carregosa / Chão de Ave / Arouca.

Getting there from the South: Follow the A1 towards Oporto. Exit at Estarreja / Oliveira de Azeméis. Follow N224 towards Vale de Cambra / Chão de Ave / Arouca. 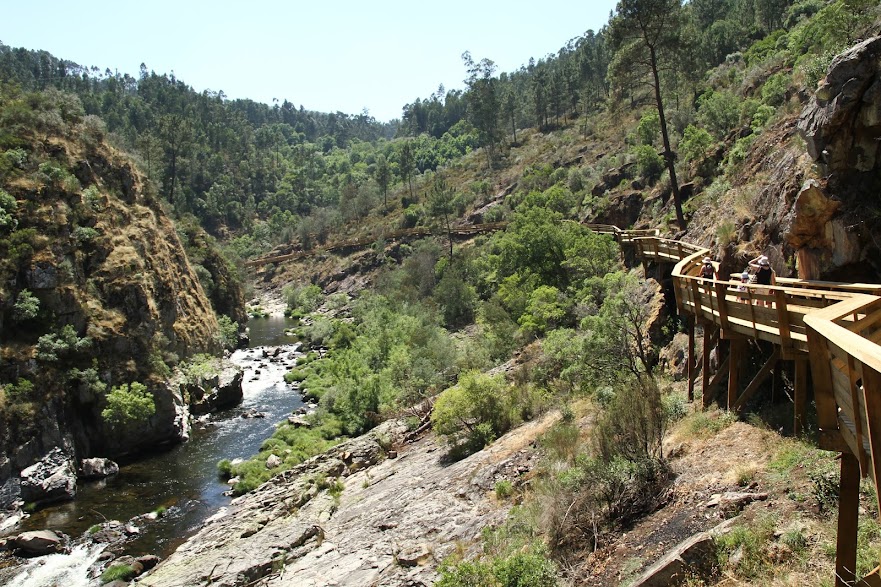